Hallo, dear worker, travelers and followers! After Wisconsin we are heading to Wyoming.

Middle May Snow.Vera (first girl from the left) and her co-workers. (Personal Archive)

But before that, let me introduce you my guest this week. Her name is Vera Daskalova. She is a sophomore at AUBG and she is planning to major in Business Administration and Information Systems. She spent her Work and Travel summer in Grand Teton National Park, Wyoming. Vera was there for around three months (from the beginning of May till the middle of August). She went in the States because she wanted to earn her own money …and to spend them. And guess what- she spent them all- she returned with two suitcases one with overload luggage (later on you will have the chance to see what did she put in them). Money, of course, is not the single reason why my guest decided to spend her summer in the States- she chose her destination wisely and it perfectly fitted her expectations- a place where she can have some rest from the city life and all its buzz, and meet new people. Vera was working only as a housekeeper at one resort and she was making around 50 to 55 hours per week. Three weeks after her arrival, her employer made Vera responsible for the most expensive sector of the resort- where the rooms’ prices were going up to $700 per night.

Housekeeping is not only about cleaning. (Personal Archive)

Vera says that housekeeping is a physically demanding job, especially for girls who are not used to such tension. However, for Vera lifting heavy mattresses was not a problem because she is working out on a daily basis! Many sport addicts are afraid that when they go to the States they will not have the opportunity to work out… No excuses for this girl, however – not only did she work out regularly, but also tried to incorporate some of the most popular basic exercises ( squat, and lunges) in her working time. As a person who tries to lead a healthy lifestyle, Vera confesses she is  not a fan of the food in the States. There she ate mostly veggies and fruit but still she gained four kilograms, which she immediately lost when she came back home.

One of her best days was when she received $160 tips from just one room. She was really happy not only because of the money, but also because this meant her customers appreciated the effort she was putting in! One month Vera got the recognition for the best employee of the month! She received a free dinner at the fancy restaurant of the hotel she was working for. At the dinner she invited one of her friends and they spent a really nice time there making a bill of $200!

Favorite things she bought–  a camera and a laptop but her most favorite objects are the ones connected to the sport- CDs with workouts led by her (and mine) fitness guru- Zuzana Light (I also strongly recommend them!). Of course, she bought Nike’s trainers… three pairs of them! She bought a lot of supplements, vitamins and sport apparel .

“They are not only cheaper in the States but also better quality, as far as i know.”, explains Vera 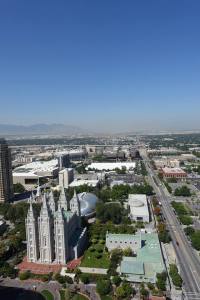 Vera’s best memory was her trip to the Yellowstone National Park. She and other six people went there by car. She was impressed with the gazers and the nature there as a whole and she strongly recommends it as a destination for all nature-loving students! Vera had the chance to see wide range of animals- bison, moose, elks, bears, foxes, and different birds. My guest also did a trip to Salt Lake City for three days (just before her flight back home). She was amazed by the city, more particularly by its architecture, and what grabbed her attention the most were the Mormons. There were a lot of them on the streets.

“The girls were dressed like old ladies, the boys, however wore suits. I even had the chance to talk to them!”, Vera explains.

Her  last day was her worst from emotional point of view. She had to say goodbye to all of the people she met there. Besides, she met her boyfriend there (yes, there is always time forlove) and although she knew she will see him after a couple of months it was a hard moment for her. According to Vera:

A summer without a love affair is a wasted summer!

Although she has some other plans for the upcoming summer, Vera would like to go back on a Work and Travel program one more time. She is not sure if she will return to the same place but she is certain that she wants to go somewhere in the nature again, because she loved it.

Vera recommends the Work and Travel program to the students because in her opinion it is a way for people to get to know a different culture and to meet new people.

What is happening in the JMC department at AUBG?

A film in the making

Follow AUBG Documentary Class students on their journey to create a feature-length film in less than a month.

WAT was your summer?

How to navigate the film festival world for emerging filmmakers?

Is there parkour in AUBG?

What was the biggest lie you believed?

The Orphanage Changed My LIfe

Are You Ready to Hear Their Stories?

Mark Wollemann: On the move

What is home? Where is home?

What was the biggest lie you believed?

What is the story behind these love letters?

How far will I go?

Teaching, filming and observing Bulgaria while working at the American University in Blagoevgrad

Can you describe the most important person in your life before finishing your breakfast?

How does sports unify your culture?

Are you a dreamer?

What drives you to do volunteer work?